You are here: Home / Announcements / 2017 Double El Ranching Conservationist of the Year

Marian Nall was recently awarded the prestigious Ranching Conservationist of the Year by Double El Conservation District and also by Upper Arkansas Watershed Association.  Her rangeland operation is approximately 900 acres; in addition she leases 320 acres from her brother that is adjacent to her property.

Marian and her late husband purchased their first ranch property in 1997 for fulfillment of their lifelong dream.  It consisted of 300 acres.  A year later, her brother bought the adjacent 320 acres which they were able to lease for pasture.  In 2003, she purchased another 300 acres.  In 2014, she purchased an additional 300 acres.

She has been conservation minded since she purchased the property.  She began installing conservation practices on her own from the beginning.  She placed timbers around a pond to prevent the pond’s banks from eroding away, silting in pond and to encourage the regrowth of grass in the area.  She later fenced off the pond area to keep the area healthy from further soil erosion and provide a wildlife habitat.

She fenced the few existing trees on the property to provide protection from livestock damage.  She began hand transplanting trees to the land to provide more protection for her cattle. She now annually plants windbreaks for livestock protection and wildlife habitats.  She restored an area that had very little vegetation due to effects from prairie dog infestations.

Five windbreaks have been installed since 2004, planting over 800 trees.  The first windbreak in 2004 was hand planted, hand watered and fenced for protection.

In 2014, Marian applied and received a rangeland EQIP (Environmental Quality Incentive Program) contract with NRCS.  She has been able to complete the following practices with this program: 5,976 feet of cross fence, 1 livestock well, 2 solar pumping systems, 1,500 feet of pipeline, 3 double livestock tanks, 10 acres cover crop and reseeding permanent grass,  and implemented rotational grazing management.  She has plans to complete a few more projects in the future.

Marian was employed as the Director of facilities for Falcon School until her retirement in 2011. 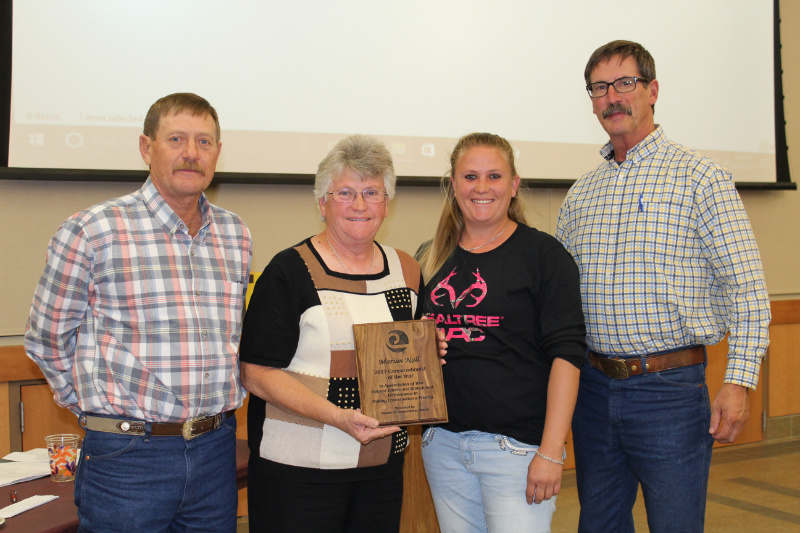