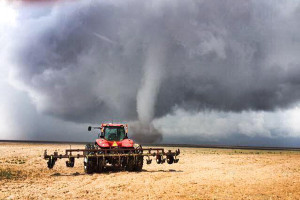 Dramatic storm or steady breeze, erosion control for soil health is a vital component on the Eastern Plains.

In conservation tillage systems, farmers disturb the soil as little as possible by using special equipment, such as disk-chisels, no-till planting drills, and subsoilers. A protective cover of residue from the previous crop—a minimum 30 percent coverage—is retained as mulch on the soil surface. This residue provides a number of benefits. During the growing season, the residue suppresses weeds, retains soil moisture, and reduces erosion. As organic matter increases over time, soil fertility improves and biological diversity increases.

There are three main systems of conservation tillage:

The No-till method connsists of planting crops that require no seedbed preparation other than opening the soil so that the seed can be placed at the intended depth. In its simplest form, no-till planting is a one-pass operation accomplished with a multi-component implement that slices through surface residue and the top 3 or 4 inches of soil, drops seeds into the slot, and squeezes the slot back together over and around the seed, leaving little or no visible evidence that the crop has been planted. This system produces the least soil disturbance of the three systems.

Ridge-till method prepares the seedbed and planting on a pre-formed ridge remaining from the previous year’s crop. The soil is left undisturbed until this single operation takes place. Ridge tillage differs from no-till planting in that some cultivation is required during the current growing season to form the ridge for next year’s crop. This system produces some soil disturbance, but not as much as the strip-till system.

Strip-till prepares a seedbed on a strip 2 to 12 inches wide and 2 to 8 inches deep. Soil remaining between strips is left undisturbed. Often strip tillage equipment will include a 12-inch subsoil shank to break any tillage pans that may be present. A conventional planter may be used in this system. Of the three systems, this one produces the most soil disturbance.

The Science of Soil Health: What Happens When you Till?