You are here: Home / Double El / Why Is That Hill Over There?

As you drive around Double El Conservation District, you might notice some hills spotted here and there. They don’t look like a natural hill but appear to be manmade. If you look closely, they are situated across a drainage, like a dam. But there is no water behind it.

A natural question is “Why build a dam and not hold any water?” If you had looked at the dam in the summer of 2015, it likely would have had water behind it. But it was gone by August. So what’s the deal?

In June of 1965, eastern Colorado was slammed with a massive storm system. Rain fell hard and fast, affecting watersheds of the South Platte and Arkansas River. The rain was so severe it caused historic flooding. 21 people in Colorado lost their lives to drowning or otherwise attributed to the storm. It hit the Big Sandy drainage as well. Several people lost their lives in the high water locally.

It very likely could have been much worse.

This is where those “hills” come in.

The dams are not built to create lakes or ponds but hold water for a short period after a storm event. By not allowing the water to flow unrestricted downstream, the force is lost and much of the damaging effect is dissipated, since water becomes more damaging as it picks up speed and force moving downstream.

Breaking the flow and holding water behind a dam for a day or even a couple of weeks is enough to keep the downstream damage to a minimum. The water soaks into the basin behind the dam, not rushing downstream destroying lives, property and livestock.

In small rainfall events, there is no downstream effect. As rainfall increases, water is slowed and held at each dam, breaking the flow up. While the dams won’t protect against all events, they do mitigate and prevent widespread damage.

Each of the 14 dams was situated to have the maximum effect on the water moving either in the Big Sandy or one of it’s tributary streams.  By slowing or stopping it at many points, water is less damaging.  These dams are part of the PL566 program.

Local conservation districts across the country have been able to build water retention structures to slow flood waters in thousands of streams. We take it for granted what these dams have accomplished.

In fact in some areas, people have built houses, barns and corrals above, below and on the structures. A hard rain will be quite a surprise for them. Many communities, ranches and farms are protected from extreme floods by these dams scattered along the drainages of hundreds of streams.

The dams along the Big Sandy are vital to preventing storm damage for hundreds or thousands of people along the stream.  Each dam is on private property. When the dam was installed, an easement was put in place with the landowner. The size of the dam is based on calculations of the watershed area draining into the dam. 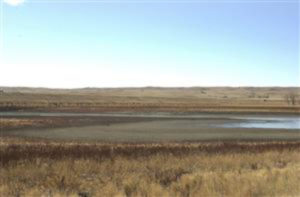 Obviously, the bigger the dam, the bigger the watershed. This accounts for the size of Ramah Dam and why it holds so much water. The dam at Ramah is a large, complex dam with several spillways. The principle spillway runs under the dam. It is a square concrete tube large enough to walk through. The structures on the east side slow the water down and prevent it from becoming a destructive force.

Double El CD has been actively doing maintenance and upkeep on the 14 dams within the district. In the last couple years, Double El has filled in erosion damage on several dams as well as putting up fences to keep livestock from trailing over the dam.

While the dams are 50 or more years old and seem permanent and unchanging, the seasons do have an effect on them. Maintenance is vital if they are to fulfill their intended function. It is to Double El Conservation District supervisor’s credit they have taken on this challenge.

As so much of modern life, it is the structures and systems we don’t see that make life easier and safer. The flood control dams in Double El CD are some of those systems to protect us and our property. Forward thinking people in the past and dedicated people now are taking this little known but vital service and protecting the Big Sandy from catastrophic floods.